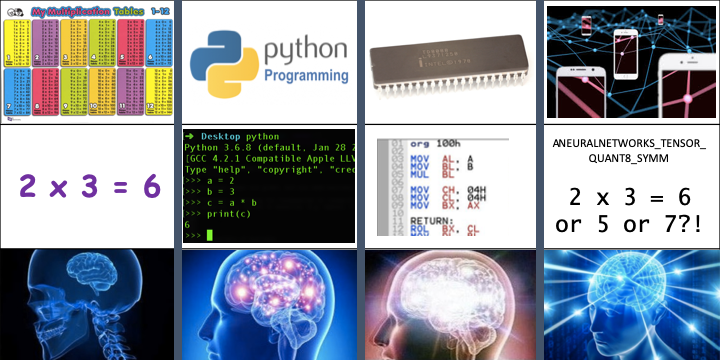 Two times three equals six or at least that’s what I naively expected.

However, according to the Android NNAPI Driver Validation documentation, a driver is valid if multiplication of quantized tensors is within plus or minus one bit.

What’s going on and how did we get here?

The non-determinism of quantized multiplication is a result of optimizing for the most common neural network deployment use cases. Neural networks used for classification and detection generally work well with small amounts of non-determinism due to the nature of the mathematical operations involved in neural networks. Furthermore, such networks often benefit from training with some noise (e.g. batch normalization). Likewise, the input to many neural networks comes from a camera that generates inherently variable images.

The main challenge associated with neural network deployment on the phone is creating models that are sufficiently fast, power friendly, and small on disk. Quantizing a neural network helps one improve in all of these categories. Quantized weights take up less space on disk, take less energy to transfer, and can be moved more quickly between different levels of memory.

The last issue at play is that it is much cheaper (both in terms of computing cost and engineering effort) to quantize a pre-trained model than to train an existing model from scratch. Consequently, the method developed in this Integer Inference paper targets quantizing existing models. The key idea is that a floating point value can be approximated as a scale times a quantized value minus a zero point. (Also take a look at the Tensorflow Quantization Spec). The scale and zero point can be chosen relatively easily by, for instance, looking at the range of the weights and activations when evaluating the model on a number of representative inputs.

The loss in predictive performance due to quantization in many practical use cases is small and this abstraction is widely implemented and baked into hardware, for instance, by Qualcomm’ Snapdragon Neural Processing Engine SDK. [Strictly speaking, the drivers for this hardware could be changed to ensure determinism, but that may result in a significant loss in speed at inference time.] The SNPE was developed and subsequently, Android sought to simplify the process of deploying neural networks given the wide variety of available accelerators. The restrictions on the driver tests were relaxed after pushback from chip manufacturers whose hardware and drivers did not produce deterministic quantized math.

Unfortunately, the NN API off by at most 1 (or 3 for a larger network) leaves a lot of room for funny business that can change the results by small amounts. The hardware and driver vendors want to produce fast times and low energy usage numbers on various neural network benchmarks and are less concerned about reproducibility. This can lead to unexpected changes in neural network outputs. For instance, the zero point or scale of the weights might be changed for some reason by the hardware, and the quantized values are then recomputed. Another thing that can happen is that the range might be slightly shifted to make zero exactly representable (see Case 3: Inputs are both negative and positive in the Snapdragon Neural Processing Engine SDK). Likewise, as the off by one error bound is on a per layer basis, larger networks generate accumulating error. Practically speaking, the error bound is increased to three for mobilenet in the NN API driver validation tests. Other networks could produce larger errors.

The lack of determinism for quantized neural networks touches on the broader issue of cross platform reproducibility and performance optimization for neural networks. As the neural networks get deployed more and more widely, these issues will grow in importance.

The first major issue is that if you want to deploy a neural network across many platforms, you don’t have any guarantees that you are going to get the same results. Even if you manage to assemble a large team to test your networks on many different platforms, the problem isn’t solved. The lack of determinism means that even if you test your network on every platform, a driver update may unexpectedly change your results. This creates an ongoing engineering cost beyond the initial fixed cost of validating the deployment on existing hardware.

The next major issue is that some application areas have more stringent standards in terms of reproducibility and auditability. Suppose that a neural network is used in a self-driving car that gets in an accident. For auditing purposes, it is important to be able to replay the decisions made by the car’s control system exactly. In the best case, this requires a significant engineering effort to keep track of all of the driver versions and internal testing to verify reproducibility for any deployment.

The final issue is that while classification and detection are not particularly sensitive to small changes in output, the lack of determinism makes it more challenging to deploy neural network models which are deeper or more sensitive to changes. For instance, imagine a language model that is unrolled over many iterations to parse or generate a sentence. In that case, accumulating errors could cause unexpected results.

In the past couple years, there has been an explosion of experimentation in neural network deployment from software frameworks to hardware accelerators. As the field matures, questions about best practices will slowly be answered. The ability to train once, deploy anywhere will become easier and easier. In the particular case of determinism, the most reasonable next step is to have a driver test that ensures determinism and publish a list of vendors that implement a deterministic API.

The question of determinism is only one small part of the puzzle of being able to deploy anywhere. Another subtle but important issue is that different operations will run faster on different hardware. Even if a network can deploy anywhere in a reproducible manner, an even more fundamental issue is whether or not a network will be fast and power efficient on any platform. Indeed, while there has been a great amount of progress in the field of neural network deployment, there is much to be done to make the ecosystem easier to use and more mature.

If you are interested in learning more about issues surrounding neural network deployment or how to be a better machine learning engineer, connect with me on LinkedIn to see my future blog posts! If you think that I can help you grow professionally, check out my coaching page.